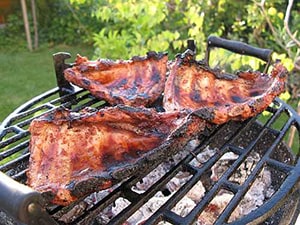 If you’re camping in the New Forest this Easter, remember to use your barbecue safely.

As the camping season gets under way, Hampshire Fire and Rescue Service and the Safer New Forest Partnership is reminding visitors about the potentially life-threatening dangers of barbecues.

Hampshire Fire and Rescue Service Group Manager Steve Quinn hopes the safety message will help to save lives in the future.

He said: “To prevent an increased risk of fire, barbecues should be used outdoors with care and in accordance with manufacturer’s instructions.

“In rural areas, they should always be off the ground and never left unattended. Approved fuel and firelighters should only ever be used, never petrol or paraffin.”

Cllr Jill Cleary, New Forest District Council portfolio holder for housing and communities, said: “We welcome visitors to the New Forest but please heed this crucial message about leaving your barbecues outside tents and caravans on campsites – and help prevent further loss of life.”

Meetings are held in  The Church Rooms, Deerleap Lane, Colbury